Tourist Places To Visit In Bahrain

Tourist Places To Visit In Bahrain Bahrain is the ultimate tourist destination and becoming one of the most visited countries in the middle east. The small island nation amongst oil giant neighbors. Bahrain is a much more historic and exotic travel destination compared to other Gulf countries with strict rules and regulations. 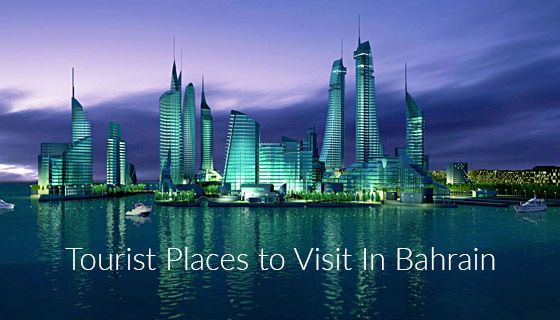 Tourist Places To Visit In Bahrain

Bahrain is the ultimate tourist destination and becoming one of the most visited countries in the middle east. The small island nation amongst oil giant neighbours. Bahrain is a much more historic and exotic travel destination compared to other Gulf countries with strict rules and regulations. Well, Bahrain has its own charm, less glitzy but more of a complete luxury package. This is where Saudis go on for weekends to let their minds relax. To add more in this nation’s corner Liberal Bahrain is as free as it gets in the Gulf. Let&rsquo's go back in time before raw oil this nation was once referred to as an ancient civilization. Still, you can see the ruins of Dilmun burial mounds coming alive, and this destination is open to visitors - plan your holidays and get your Bahrain tourist visa online.

Did you know what is so impressive in this region? Let&rsquo's take some insights into Bahrain.

Bahrain is rich with its natural resources, for example, the country is famous for oil resources. In spite of having one of the most expensive currencies in the world, Bahrain is reducing its dependency on oil by investing heavily in tourism. So travel to Bahrain for holidays, walk around the winding alleys of Muharraq for some truly authentic Gulf charm, unlike the spruced-up tourist versions you find elsewhere. Visit the modern skyline of Manama from Muharraq. And don’t forget to pay your respects to the Tree of Life (aka Shajarat-al-Hayat).

Best Of Bahrain - Places to Visit

Offering a glimpse into the pre-oil era in Bahrain, this majestic building was constructed around 1800 and is one of the finest examples of early Persian architecture. What makes this creation outstanding is its unique system of air conditioning; the sitting room downstairs gets cooler even in hot summers by the down-draft from the wind tower. However, you can experience yourself by standing beneath it to see how effective this system really is.

A 10- min drive from central Manama, and standing guard on the remains of the ancient settlements. Bahrain Fort is amongst one of the Unesco World Heritage sites. It was built in the 16th Century by the Portuguese as a part of the string of defences along the Gulf. The perfect time to visit this fort is at night when the history of the site comes to rise out of the ruins and linger between the floodlights.
The site was occupied from about 2800 BC and seven layers of history including earlier two forts beneath the Bahrain Fort. There is mysterious history to be represented in the digs surrounding the fort.

A Landmark in Bahrain: Tree of Life

You will be surprised by knowing the facts behind the Tree of Life, Everyone tried to figure out but not one has been succeeded to find out the exact reason behind this miracle. What miracle?   Alone and spreading mesquite trees somehow survive in the barren desert. But wait what is so miraculous in that? Plenty of trees and thorn bushes do that. It has survived for so long and no one is sure what sustains this old knot of thorny branches, but it has presumably tapped into an underground spring – a miracle that has led some to suggest it is the last remains of the Garden of Eden.

Tree of Life a.k.a Gateway of Bahrain was first built by the Britishers and designed by Sir Charles Belgrave in 1945, the entrance to   Manama Souq, it was redesigned in 1986 to give it more of an ‘ Islamic’ Flavour. The small square in front of the bab (gate) was once the terminus of the customs pier.
Bahrain is attracting thousands of Indian citizens every year, with so many tourist places to choose from. So what are you waiting for? Book your holiday package and head out now!